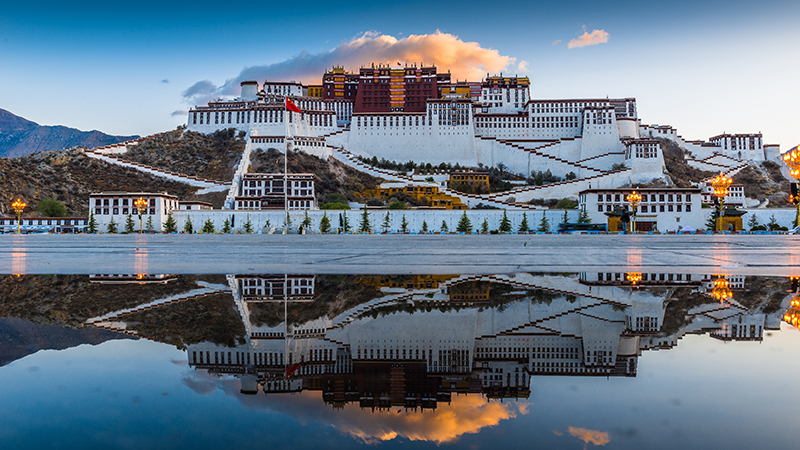 Upon arrival at the airport, your tour guide will meet and greet you, and will locate you to the bus where your exciting trip begins. Tibet, a historical region often referred to as “the roof of the world”, housing some of the most unique cultural, historical and religious presences. Tibet is located on a high plateau, the Plateau of Tibet, surrounded by enormous mountain masses, it is truly remarkable that civilization was able to be establish there. Upon arrival in Lhasa, your local tour guide will meet and greet you at the airport. Shortly after, you will be transferred to the hotel for check-in; Enjoy the rest of the day at leisure for acclimatization, and explore the Tibetan plateau or local bazaar at your own pace.

After breakfast, visit the great museum and World Heritage Site, the “Potala Palace”; a winter palace of the Dalai lama since origination in the 7th century, the site was built over the renowned “Jokhang Temple”, erected by the late king Songtsen Gampo. The “Jokhang Temple”, being one of the oldest temples in Tibet history, is considered the most sacred site in Tibetan Buddhism. It, along with the “Potala Palace”, has since been rebuilt to the present size by the 5th Dalai lama in the late 17th century. Walk through the streets of Barkhor (built in 1416 by Tsongapa’s disciple—Jamyang-Choje, is the middle square of Jokhang Temple), and experience the saintly sensation this sacred and historical place provides you; Experience the sacred site and get a great photo opportunity from both at-far and up-close to capture this magnificence of a site.

After breakfast, we will visit the “Drepung Monastery”, also known for as “Rice Heap Monastery”. Founded in 1416 by Tsongkhapa’s main disciples, it is renowned as the largest monastery in Tibet, and also is known as a member of the “great three” Gelug university monasteries of Tibet. Then, visit the “Norbulingka”, which in literal translation, is named “Jewel Park”, served as a traditionally summer palace residency for those successive of being the Dalai Lama. Recognized as a UNESCO World Heritage Site, the park was founded by the 7th Dalai Lama, serving nowadays as an administrative centre and religious centre. The park spans over 100 acres, filled with palaces, pavilions and an onsite zoo.

After breakfast, visit a local nunnery, the “Ani Tsankhung Nunnery” located about 1 km south of the “Jokhang Temple”, to learn about the hardships and dedication required to make the life-changing choice of becoming a monk or nun in significance to the region. Housing about 100 nuns, it is one of the biggest nunneries in Tibet. Next, visit the “Sera Monastery”, the second biggest Gelupa university monastery, located in the north suburbs of Lhasa. The monastery is also known as another member of the “great three”; Which was built in 1419 by one of Tsongapa’s lesser disciple, Jamchen Chojey Sakya Yeshe. The monastery is situated at the foot of “Tatipu Hill”, which is located at the heart of the oldest section of Lhasa. The name Sera, in Tibetan language, translates to the “wild rose”. The name originated from a phenomenon that occurred on the very hill behind which the monastery was built upon. During its constructing period, wild roses bloomed the entire hill-side, thus the origination of the name.