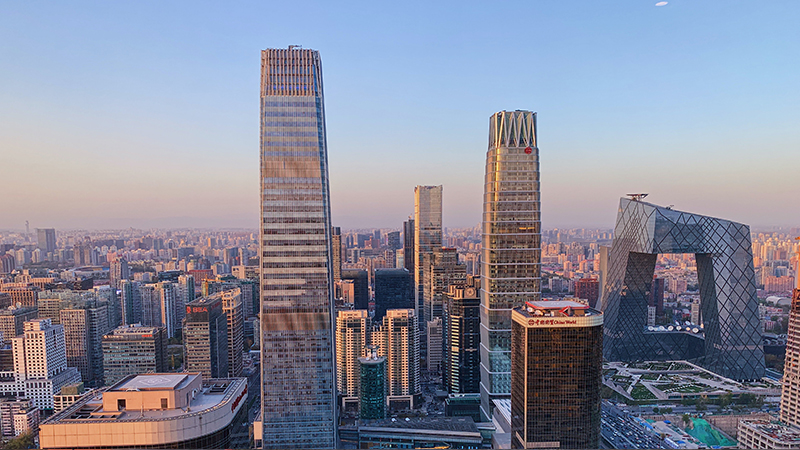 Upon arrival in Beijing, take a taxi to your hotel. Check-in to your hotel and enjoy the rest of the day for self-exploring or relaxation.

Today, we will visit the world renown Tiananmen Square, the very centre of the capital of China. After, venture into the Forbidden City, the former palaces of many emperors throughout the Ming and Qing dynasty; a true architectural masterpiece. The Forbidden City is also a home to the National Palace Museum, which showcases many rotating exhibitions of ancient Chinese arts and crafts. Get a great opportunity to learn about the hierarchy and culture associated with it. After lunch, proceed to the Summer Palace. The palace was once a royal retreat, after the fall of Qing dynasty, it has since been under careful protection and is now renown for being the best-preserved imperial garden in the world. Explore the spectacular park and experience the imperialness associated with it. This evening, you can delight in a famous Peking Duck dinner (USD $35/person) banquet.

Today's highlight is an excursion to the world renowned, majestic, The Great Wall (JuYongGuan); Also known as one of the “Seven Wonders of the World”. Get a chance to climb a section of this 3,700-mile marvel, and get a breathtaking experience to the beauty and magnificence of this wonder. Afterwards, tour the iconic “2008 Beijing Olympic Center”; including the famous Bird’s Nest and Water Cube. The Olympic Centre now hosts many spectacular opening ceremonies and events. Experience the brilliant architectural structure design from the outside view, providing a perfect photo opportunity to capture these gorgeous buildings. Then, visit one of the largest Jade Exhibitions in Asia, made possible by the Dragon Land Jade company. Observe the sophisticated craftsmanship of the many jades on display and get a great opportunity to bring one home yourself. Tonight, you can choose to participate in a large-scale musical drama show, The Golden Mask Dynasty show (USD $50/person). An original Chinese drama play, which incorporates dancing, lighting and acoustics, acrobatics and some magnificent costumes to recreate the wonderful legend. Produced by Chinese playwrights, directors and designers, the play has eight chapters and includes more than 200 actors from China and abroad in a single performance.

Full morning and noon (afternoon depending on scheduling) to explore Beijing on your own. You can also sign up and participate in a highly recommended half-day program we offer; (USD $79/person) Beijing Day tour. Today, we will take a tour to the Temple of Heaven, an imperial complex of religious buildings, it is recognized by UNESCO as an architectural masterpiece built between 1406-1460 A.D. Historically, it is an Imperial Sacrificial Alter, and was used in the past by emperors from the Ming and Qing dynasties for ceremonial honouring and praising to the gods of harvest, atonement for the sins of their people and seek divine clearance from the gods. Afterwards, take a famous rickshaw Hutong Tour and experience the culture and dynamics of what it would have been like to reside in ancient China. Then, received more insight on the diminishing of Hutongs through a Local Family Visit, where, also, an included local family meal will take place. Later, visit a famous Chinese Medical and Pharmaceutical company, Tong Ren Tang. Officially founded in year 1669, it has trained and provided many imperial doctors to former emperors of Qing dynasty. Discover the rich history, theory and philosophy of traditional Chinese medicine. Also, find out the health preservation methods through the Chinese medical way.

After breakfast, your land tour will end at your hotel. Begin traveling home or extend your journey to other cities in China. 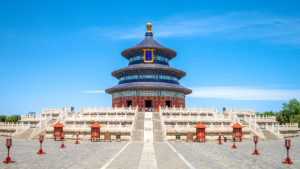 Temple of Heaven build in 1420s, inscribed as a UNESCO world Heritage Site, was visit by Emperor of the Ming and Qing dynasties for annual ceremonies of prayer to Heaven for good harvest.

Hutongs are traditional alley ways that made up Beijing’s old city planning, take a special rickshaw ride for an immersive tour to get a wonderful glimpse into yesterday’s world, the old way of life and traditional Beijing culture, and see the dramatic changes the city has undergone, continue to visit a local family and local market afterwards. “炸酱面” (fried sauce noodles) would also be provided by the local family as lunch. 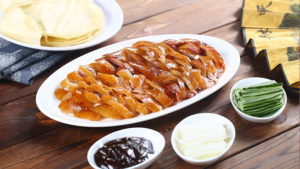 Peking duck is a dish from Beijing (Peking) that has been prepared since the imperial era.

The meat is characterized by its thin, crisp skin, with authentic versions of the dish serving mostly the skin and little meat, sliced in front of the diners by the cook. Ducks bred specially for the dish are slaughtered after 65 days and seasoned before being roasted in a closed or hung oven. The meat is eaten with spring onion, cucumber and sweet bean sauce with pancakes rolled around the fillings. Sometimes pickled radish is also inside, and other sauces (like hoisin sauce) can be used. Duck has been roasted in China since the Southern and Northern Dynasties. A variation of roast duck was prepared for the Emperor of China in the Yuan Dynasty. The dish, originally named “shāo yāzi” (烧鸭子), was mentioned in the Complete Recipes for Dishes and Beverages manual in 1330 by Hu Sihui, an inspector of the imperial kitchen. The Peking Roast Duck that came to be associated with the term was fully developed during the later Ming Dynasty, and by then, Peking Duck was one of the main dishes on imperial court menus. The first restaurant specializing in Peking Duck, Bianyifang, was established in the Xianyukou, close to Qianmen of Beijing in 1416. 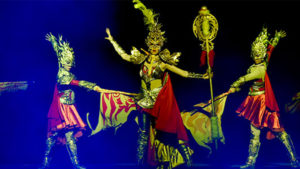 An authentic Chinese Drama play, which incorporates Chinese dances, acrobatics, costumes, and lighting and acoustics. The play has eight chapters and more than 200 actors from China and abroad. Produces by Chinese playwrights, director and designers. The play set in the Golden Mask Dynasty, a legendary age in China, the story tells how a queen, who wears a golden mask, and creates a splendid dynasty throughout the complex artistic presentation.