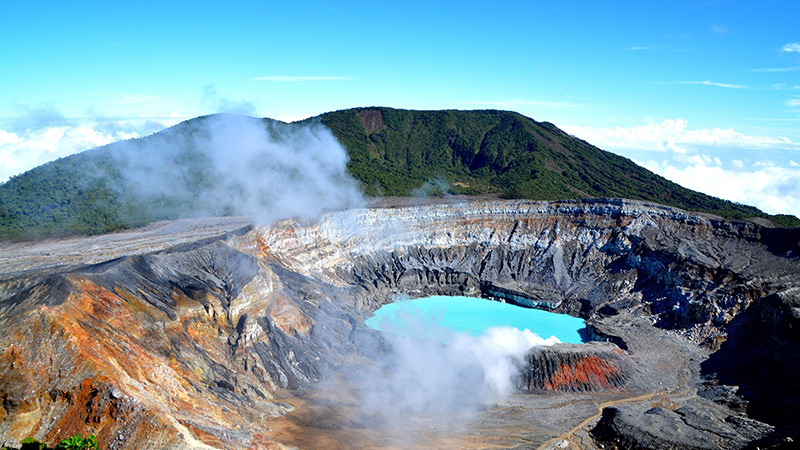 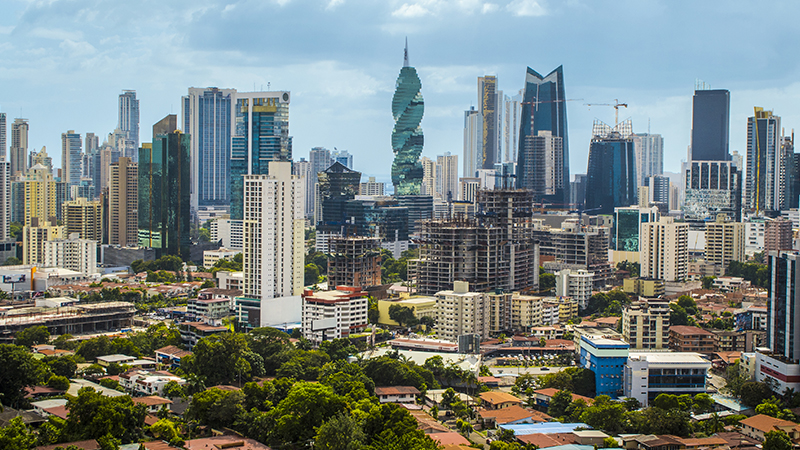 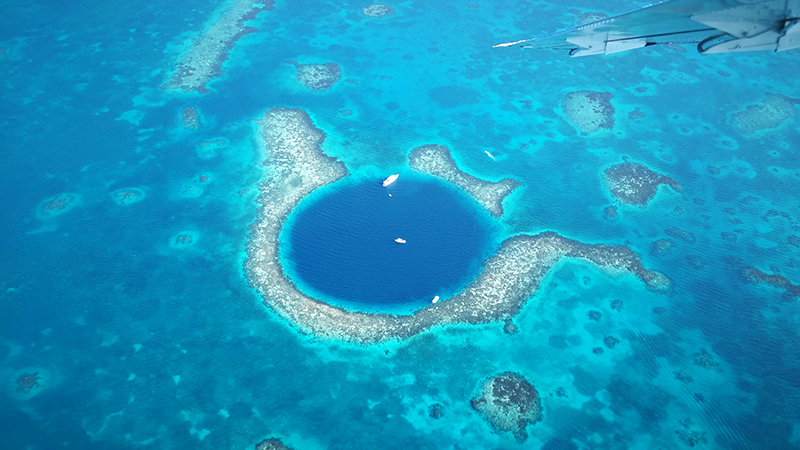 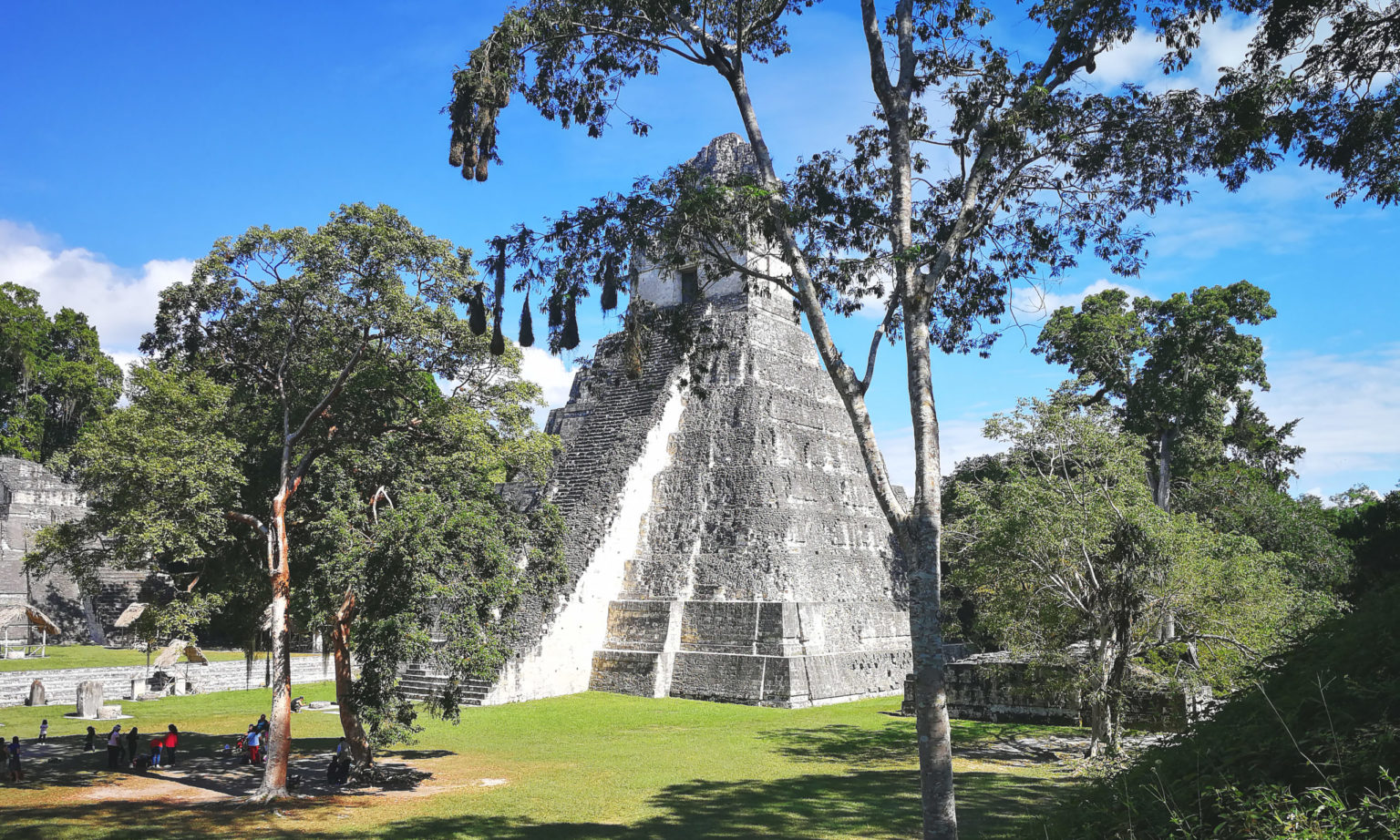 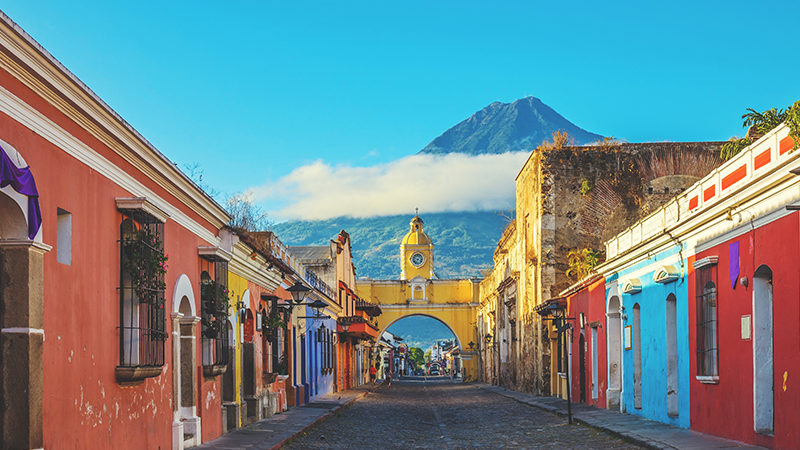 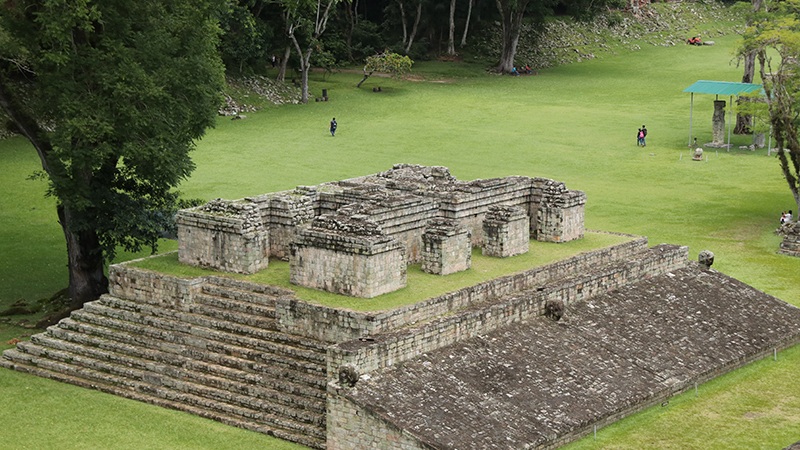 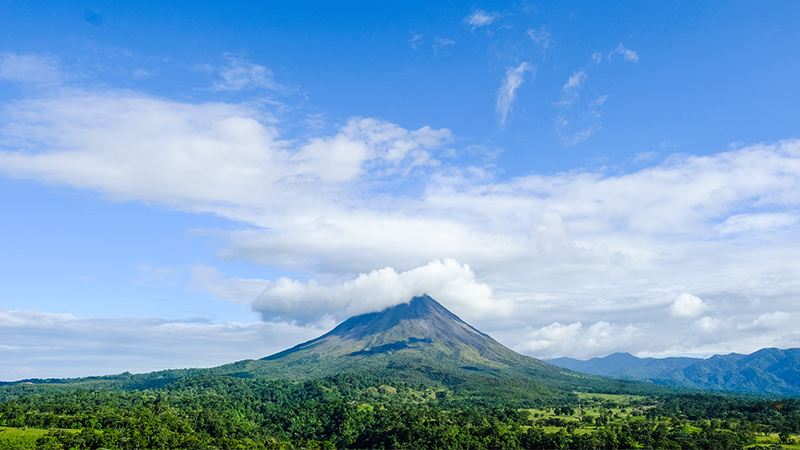 Discover the Grand Central America with us on this 12 Days tour to Guatemala, El Salvador, Honduras, Nicaragua and Costa Rica as well as Panama. Amazed by the historic elelments Antigua-Guatemala’s captial, blown away by the beautiful nature in El Salvador, and explore the mysterious Mayan Copan Ruins – a must see UNESCO in Honduras.

After breakfast, then Half day Panama City tour, plus sightseeing of Panama Canal, causeway and etc. Lunch is included.

Upon arrival, take small plane overflight Belize Big Blue Hole, one of the ten geological wonders in the world. The Ice age was a big, dry hole, melting glaciers and rising sea –after that, transfer to hotel, stay overnight at princess Ramada hotel.

In the morning, have breakfast in the hotel. Then we will visit Belize city with main parks and buildings. Transfer to Flores (Guatemala) 4 hours’ drive.  (200 km) Stay overnight at la Casona del Lago.

Tikal is one of the largest archaeological sites and urban centers of the pre-Columbian Mayan civilization. It is located in the municipality of Flores, in the department of Petén, in the current territory of the Republic of Guatemala and is part of the Tikal National Park, which was declared a World Heritage Site, by Unesco, in 1979.1 According to the glyphs found in the site, its Mayan name would have been Yax Mutul.Tikal was the capital of a belligerent state, which became one of the most powerful kingdoms of the ancient Maya. Although the monumental architecture of the site dates back to the fourth century BC. C., Tikal reached its peak during the Classic Period, between 200 and 900 AD. C. During this time, the city dominated much of the Mayan region, in the political, economic and military sphere; it maintained links with other regions, throughout Mesoamerica, even with the great metropolis of Teotihuacan, in the distant Valley of Mexico.

After the Late Classic, no major monuments were built.

With a long list of dynastic rulers, the discovery of many of their respective tombs and the study of their monuments, temples and palaces, Tikal is probably the best understood of the great Mayan cities of the lowlands of Mesoamerica- accommodation at las Americas hotel.

After breakfast, we will tour the city of Guatemala, after lunch, take bus to Antigua continue our trip.

Antigua is a small city surrounded by volcanoes that is located in southern Guatemala. It is known for its Spanish colonial buildings, many of which were renovated after the 1773 earthquake that ended the 200-year reign of Antigua as the colonial capital of Guatemala. Among the architectural monuments highlights the squat baroque church of La Merced, white and yellow, which is an integral part of the city's famous Holy Week, during which parades and rituals are organized. Visit to la merced church calle del arco main squared, palace, cathedral, cocoa tour, jade factory, souvenir market.  Overnight at Hotel Soleil La Antigua.

Scenic mountain and volcanoes drive to Chichicastenango.  Every Thursday and Sundays, the Chichicastenango Market exhibits the largest and most colorful handicrafts market in The Americas.  Artisans from all over the Maya Region come to sell beautiful textiles, ceramics, and wood carvings and to practice their ancient rites at the town Santo Tomas Church. After we will visit and guide a tour on Atitlan lake a visit 2 indigenous sites accommodation at las Americas hotel.

After breakfast, transfer to Copan. Upon arrival, enjoy lunch and tour the famous Copan ruins. The Maya of Paris, one of the most outstanding cultural monuments in the world. The Copan Archaeological Park was declared a World Heritage site in 1980. Maya's influence is thought to have begun around 300 AD and 400, when it became one of the most important Mayan cities in Central America, developing its own art and architecture. It can be said that Copan is the most beautiful Mayan city. It has no huge buildings like Tikal or Palenque in the Andes, but each stone Penn reveals the ruler's majesty and skill as a skilled craftsman. The local guide will take us on a tour and explain the history behind all the temples, sculptures, and hieroglyphics. Stay overnight at marina Copan.   270 km, about 6hs drive.

After breakfast, we will visit san Salvador historical down town, metropolitan cathedral, main squares, monsignor Romero the mayor district we will continue to the west on route you will have beautiful views of jiboas vally and volcanos – overnight at hotel comfort inn la union.

After breakfast, we will take a boat to Potosi Port on the beautiful Fonseca Gulf. Arrival at the Port of Potosí in Nicaragua. Reception and private transfer with the assistance of a national tour guide to the colonial city of Leon. Accommodation at Hotel Austria.

Transfer from Leon to Granada with the assistance of a national tourist guide en route panoramic visit of the Capital City of Managua. Continuation to Granada to Discover Granada, the most beautiful, captivating and photogenic Spanish-colonial city and the oldest continuously inhabited European settlement in Nicaragua founded by the Spanish captain Francisco Hernández de Córdoba in 1524 during a pleasant tour. Free time for lunch. Then enjoy a pleasant boat trip through the lush and romantic volcanic islets of Lake Nicaragua. At the end of the afternoon, explore one of the most active volcanoes in the world, the “Masaya Volcano National Park” and discover the lava lake of the active Santiago crater, one of the eight lava lakes of the planet. Accommodation at the Hotel Patio del Malinche.

Then enjoy a pleasant boat trip through the lush and romantic volcanic islets of Lake Nicaragua. Transfer to costa Rica border.

After breakfast at the hotel, visit Poas. It is the world's largest intermittent outbreak of active volcanoes and one of Costa Rica's famous active volcanoes. At the peak there are 2 craters; standing at the main mouth of the volcano can smell the volcano's constant smell of sulfur gas. The other is a volcanic hukou, which has a PH value of nearly 0, and is one of the most acidic lakes in the world. Afterwards, head to the Peace Falls Garden for an exquisite buffet lunch, and after lunch, visit this green and natural place, in addition to the park's most special waterfall landscape, there are a variety of South American endemic species gathered, like a small zoo. There are hummingbird dances and butterflies, as well as eye-catching jungle cat areas, where 5 species of American cats are located, including small American leopards, leopard cats, American bobcats, jaguars and cougars, and insect pavilions, snake pavilions, frog pavilions, etc., and have the opportunity to engage with large beak birds in close proximity. Panoramic San Jose city tour Overnight at Hotel Park Inn San Jose.

Enjoy breakfast at hotel, relax, and take flight back home. 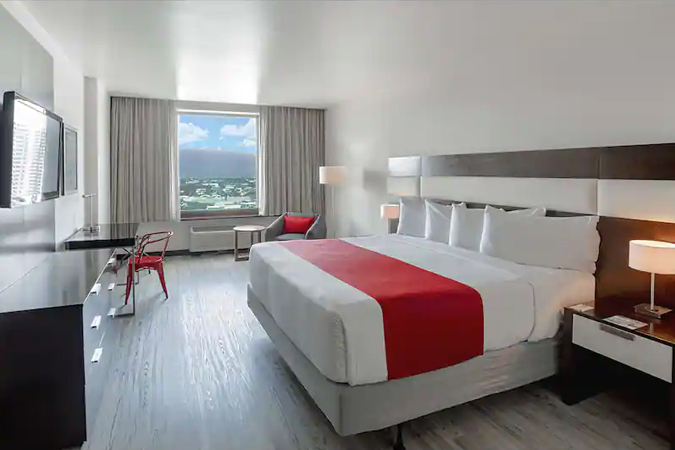 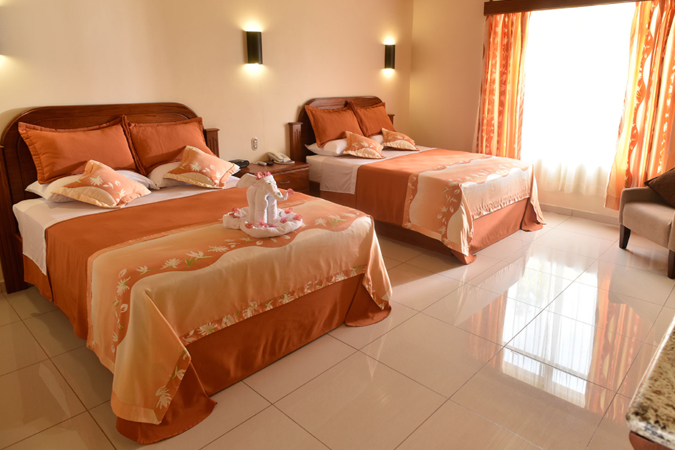 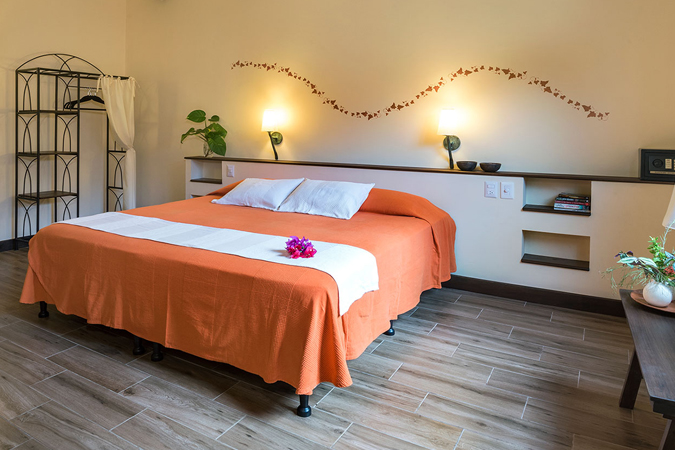 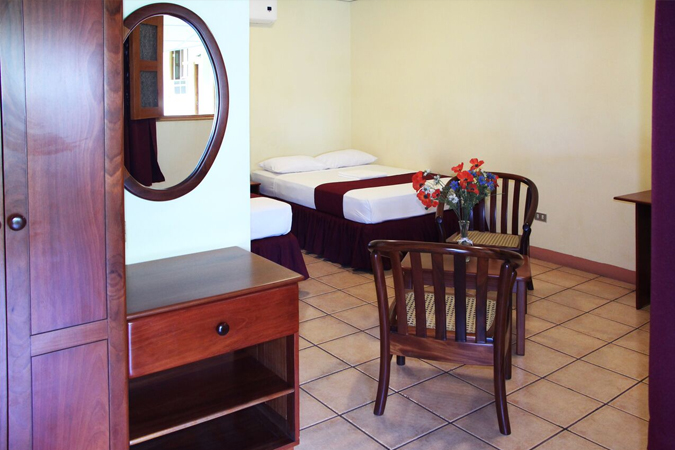 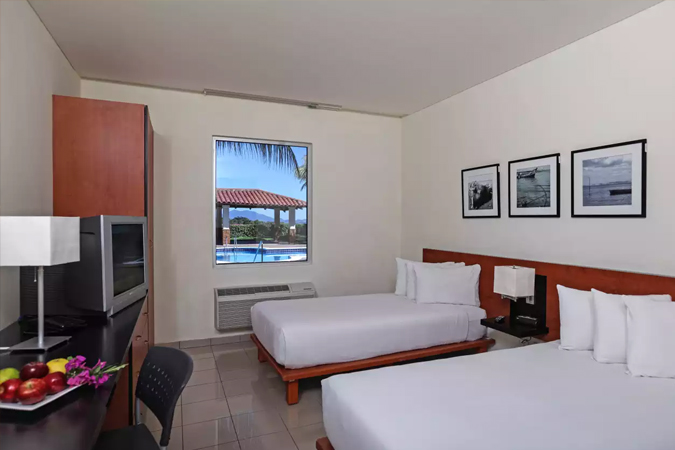 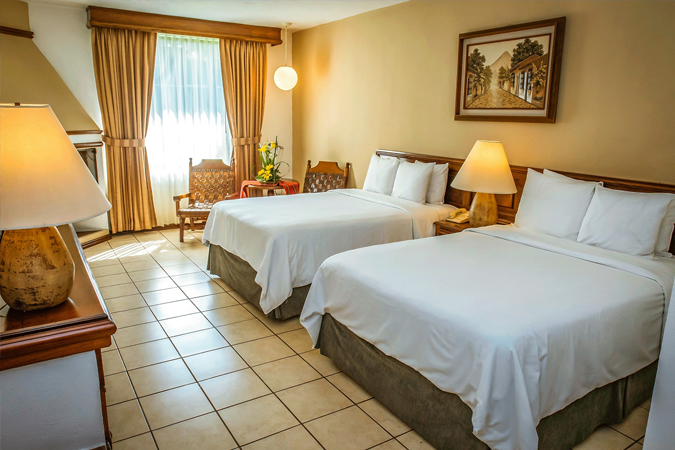 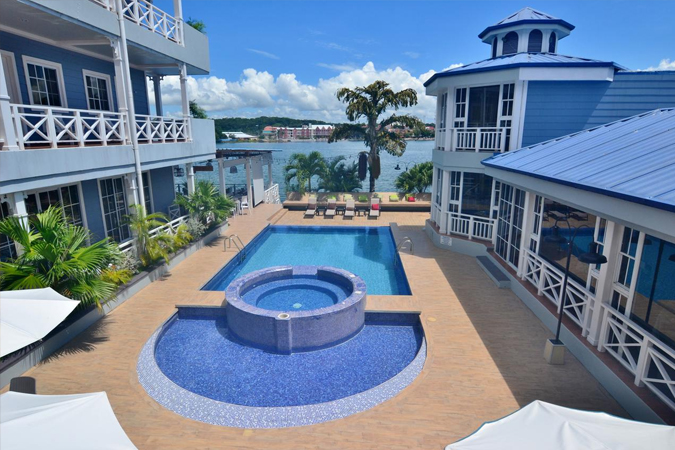 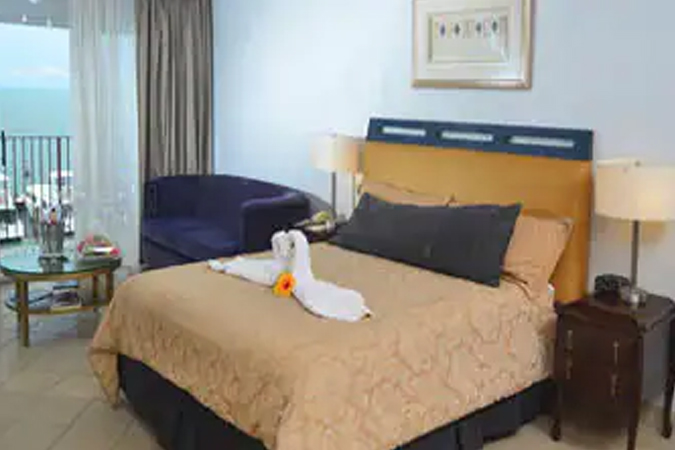 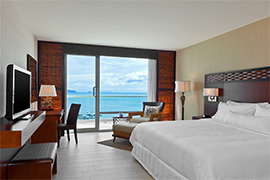 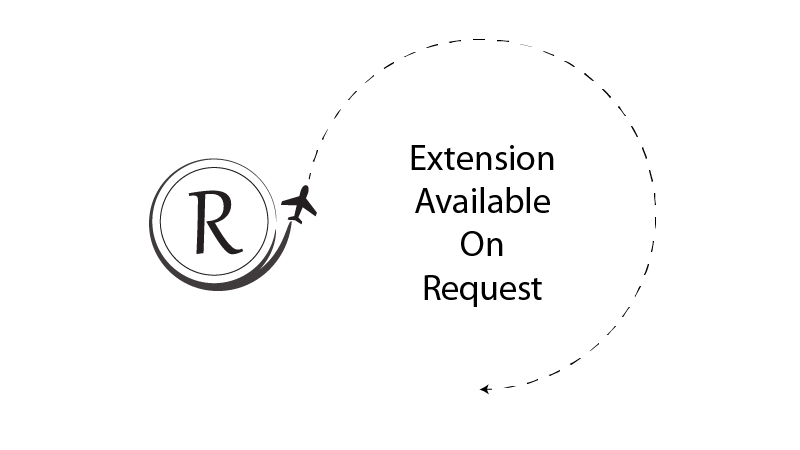 Thinking about staying longer after the trip? You definitely can!

For US & Canadian passport holders,  Tourist Visa is not required.

Border Taxes need to be self-paid when crossing borders.

Make sure your passport is valid for at least 6 months beyond the date you expect to return.